Apple Pie Nachos with Cinnamon Sugar Tortilla Crisps — A recipe that you can whip up with a few store-bought ingredients, with an option to make them even easier!

I can’t tell you the last time I devoured an entire platter of dessert, practically on my own. Well… until two days ago when my friend Kate came over, and we made apple pie nachos. I had texted her the night before and said:

Hey, I’m headed to the store. Do you have any fun dessert ideas that we can whip up really quick for the blog?

Yep, grab some soft burrito tortillas and a can of apple pie filling. We’re going to make some apple pie nachos.

Uh, hello! You got it, sister.

I have seen others make cinnamon-sugar tortilla crisps/wedges/whatever… and serve them with fruit salsa. (I think I Heart Naptime has my favorite recipe for that delicious dish.)

But when Kate told me that we were going to pour apple pie filling over the top of them, I kind of fell in love with her.

UPDATE: While browsing Pinterest, I found this other recipe where Mandy’s Recipe Box Blog used tortilla chips to make Caramel Apple Nachos! So so cool! I love all of the different ways that you can make the “chip” part of these nachos.

But when you have a few minutes to spare, I have a feeling that making these cinnamon-sugar tortilla crisps at home will tickle your fancy a bit more.

We literally ate the apple pie nachos just like this. The filling was poured right out of the can on to the crisps and we ate it. BUT, if you pop this in the microwave for a minute, I bet it would be OUT of this world.

I caught my kids AND my husband devouring their own little platter when we left the room the other day to work on something else for the Fabulously Fast Dinners Cookbook. So it’s safe to say that this recipe is family approved! 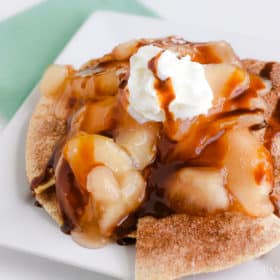