After having a Yes Day for my kids, I was completely shocked at what they requested. I learned a huge lesson as a mom too.

My husband looked at me like I was crazy.

“A yes day, for the kids, Jessica? Why would you do that to yourself?“

“I want to see if I can do it, and see how spoiled the kids really are.” 🙂

A while back, I had heard of another mom having a “Yes Day,” for her kids, and I thought it was the coolest thing. I do remember thinking:

Holy cow. A whole day where my kids get told “yes,” to everything that they ask for. Is that possible? I mean, what if they ask to fly to California, or want to do something really nasty, like play in a sewer treatment plant?

So I thought experimenting with a “Yes Day,” while my kids are toddlers would reduce the risk of their creativity to expand beyond reality. I was right. I took along my camera for the adventure, to capture the moments, and I’ll admit… I’ve looked at them a million times, reflecting on the day that we had.

Honestly… it went WAY better than I expected, for TWO reasons.

1.  My kids didn’t ask for anything extravagant. Everything they asked for was WAY less than what I would imagine, if I tried to read their minds and surprise them with something special. Their level of “special,” and my level of “special,” were completely indifferent.

2.  This “Yes Day,” was more of an eye opening experience for me, their mom, than I feel that it was a “Let’s see what we can get away with,” day for my kiddos. Let me show you our day, and you’ll understand why:

I hadn’t told my kiddos that we were going to have a “Yes Day.”

I wanted to see first what it was like for them to go on about their day, without knowing I would say “yes,” to everything they asked for. (Now keep in mind, my youngest is one, so he wouldn’t quite understand the whole concept anyway. But believe me, he asks for things in his own way ALL day long, so this little experiment would work just fine with him.)  Eventually, about half way through the day, I told them it was a “yes,” day… to see if I would get a different response.

My three year old asked to play on the iPad when he crawled out of bed. Typically I’ll say to this request, “Not right now. We can find other things to play with right now.” But today, “Yes.”

Not minutes after the iPad turned on, my one year old decided to make his debut that day, and holler at mommy to come get ’em. (Pardon the fuzziness. It was dark in there.)  😉

I don’t know about your family, but we always have to have a little “wake-up,” session on our couch, until everyone fully wakes up, to begin the day. This usually involves cuddling, brotherly bonding time (that only happens if they’re half asleep) sitting on mommy’s lap.

After he had his fill with the iPad, my 3 year old requested to watch his “Bible Stories,” movie. Be still my heart. So… a little movie action took place, with a side of carrot-orange juice. Seriously… I’m loving “Yes Day,” so far, and I’m thinking, “I can do this.”

Lucky us, it was a beautiful day, and the tots decided to play on the back porch after breakfast. (In which they ate exactly what they requested, by the way. Waffle and yogurt for my three year old. Oatmeal for the youngin.) 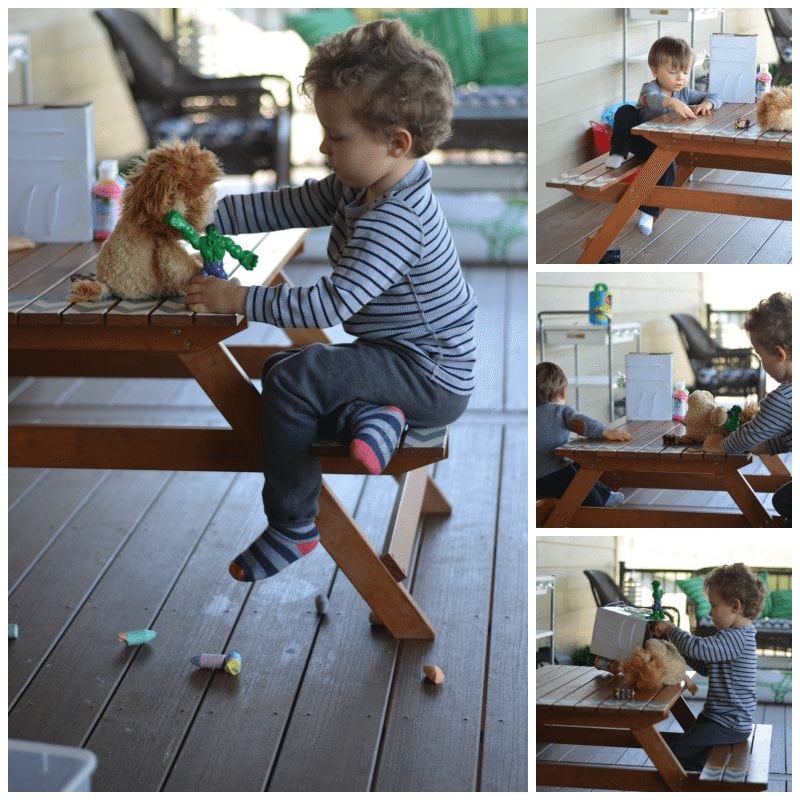 (Good thing too, because we needed some serious groceries.)

My three year old LOVES pushing his own cart in the store, which makes my life as a mom a little easier to do some shopping. Plus, I get THAT much more room to pile in some groceries, when my cart gets too full. 😉

Whew… that was a close one. The oldest spotted that new superhero cereal, thought it was the coolest thing ever… but didn’t ask for it.

My youngest… spotted the cookies in the bakery, AND asked for it. Not so lucky. But hey, it kept him settled enough to let me finish my shopping. 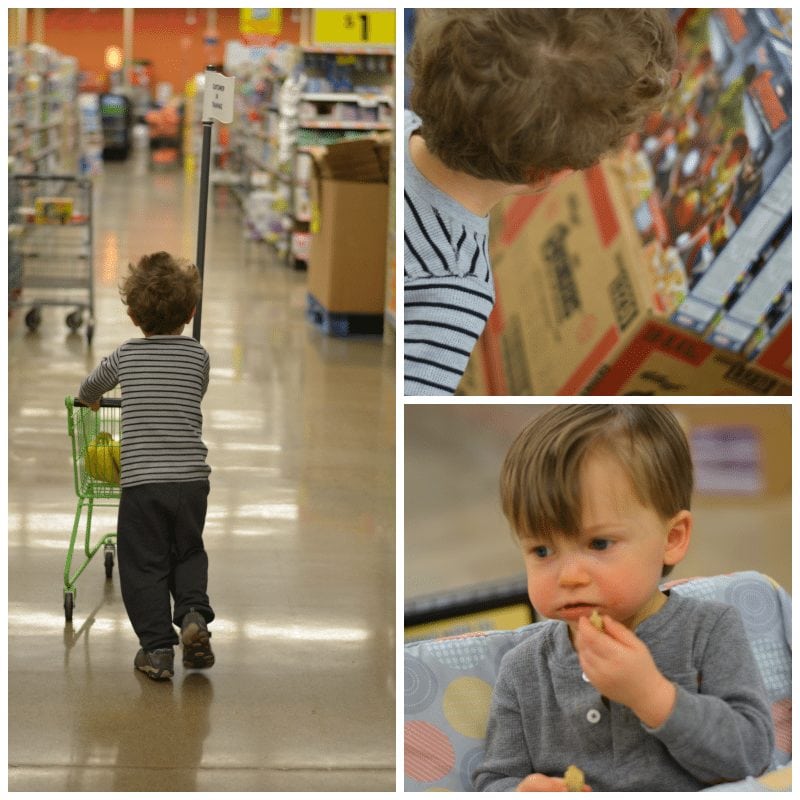 “You bet!” So off to the restaurant drive thru we went, and grabbed our lunch, and headed home for a picnic lunch on the back porch. Camera in hand, but no iphone, no nothing for mom. Just lunch with my boys.

After that “filling,” grilled cheese lunch, it was time to play. Requested? Play on the porch some more with bubbles and superheros.

It was at this point, that I told my oldest that it was a “yes day.” He looked at me and said, “So I can ask for anything, and you’ll say “yes?”

His eyes TOTALLY lit up.

Then… nap time. Yes, my youngest really does request nap time. Don’t believe me? Ask anyone I know. Some days, he’ll grab you by the hand, lead you to his room and point at his crib; arms up, and grunt. It’s time for nap.

While the youngest napped, my oldest and I spent some quality time together. We played with his new purchase from the grocery store… Old Valentine’s Day cards on the clearance aisle for .19 cents. Really? Yeah, I got away easy with that one.

“Mom, can we play outside?”

They LOVE playing outside, and didn’t even ask to go to the park ONCE. I was completely shocked. I thought for sure on “Yes Day,” I’d be packing the boys up and headed to the park. But our front yard was good enough.

So to the playroom we went. Mommy finally got a chance to sit down and relax.

Notice my youngest likes to eat his pizza with one arm out of his shirt. Not sure of the reasoning behind that, but I had to say “yes.” 😉

This concluded our photo session of our “yes day.” We did end up having baths after dinner though. But they LOVE bath time, and after the wild and messy day that we had, mommy loved the idea of bath time for them too.

Why I Had a Yes Day for my Kids:

(and what I learned)

You may be telling yourself, “Ok, after seeing those photos, I never saw anything CRAZY.” You’re right. I didn’t either. It looked like a typical day. A special day… but a typical day.

How so? My kids are completely blessed. They’re healthy, have full bellies every night before bed, have a roof over their head while they sleep at night, a huge family that loves them, and a play room that looks like toys r us threw up in.

What would I have tried to do for them if it was a “Mom’s Day to Spoil?”

Now don’t get me wrong. Would they love to do those things? Oh I’m SURE!

But reality is, I let them ask me for anything they wanted, and this was the result.

Sometimes, I think we as moms, think we have to be extravagant to make our kids days exceptional. I think we’re wrong moms. It won’t be that expensive toy that you bought your kiddo, that he’ll remember when he’s 18, looking back at great memories of his childhood. It will be those moments that we spent with them as moms, (and dads) giving them that undivided, simple attention.

Some funnies and (almost) “NO” moments of our day?

What am I most surprised about from “Yes Day?”

I really don’t say, “No,” that often. Really. When I became a parent, I told myself that, the word “no,” would be very rare in my vocabulary. Why? Honestly, I think I read a blog post once about it. Go figure. But I wanted the word, “NO,” to be serious. For instance, “NO!!!” would catch my child’s attention if they got close to the road, or in any case of danger. If I’m constantly saying “NO,” at home, they may become immune to the word and tone, and would not have the effect that it should, when it comes time.

So what are the other options of not saying “no?”

There are TONS of ways to say “no,” without saying “yes.”