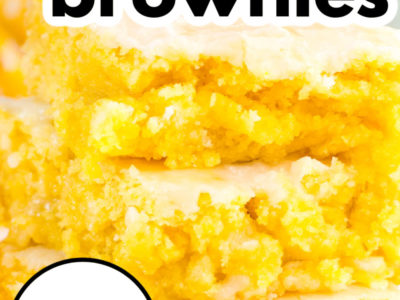 This lemon cake mix brownies recipe is made with a cake mix, and only a handful of other ingredients, creating an easy, gooey brownie dessert that lemon lovers adore!

Quick Overview: Only 6 ingredients, and a prep time in as little as 5 minutes, you’ll have lemon brownies baked in 20 minutes + optional glaze recipe!

Lemon is delicious any time of year but especially in the summer months! And with this summery dessert, you won’t be standing in front of a hot stove and it only has to be in the oven for 18-20 minutes!

If you’re looking for a cake-style brownie, this won’t be it! This brownie recipe has an ooey-gooey texture and is very dense and rich!

With a cake recipe, using a cake mix, most call for water, giving it more of an airy, cakey, texture. This recipe does not use water so it creates a thick, brownie batter.

If you prefer more of a cake-style, adding a little water may be for you but just keep in mind that it may change the bake time, and it may result in just making a lemon cake, instead of a lemon “brownie”.

This was inspired by the strawberry brownies that have gone viral on Facebook and being a lemon lover myself, I knew a lemon version of the brownies would be a HIT as well!

The first part of this recipe is for the brownie batter! All you need is:

The second part of this recipe is for the optional (but highly recommended) lemon glaze! Here’s all you need for the glaze:

See the full, printable recipe card at the bottom of this post to get measurements and instructions!

Gather all of your ingredients and a medium-sized mixing bowl.

What to Serve with Lemon Brownies

The lemon brownies are very rich and can be enjoyed alone but they’re also incredible, topped with a scoop of vanilla ice cream, or even sliced sugared strawberries.

How to Store Brownies

Once the brownies have cooled completely, store any leftovers in an airtight container, on the counter for 3-4 days. They do not have to be refrigerated, although refrigerating can extend the life of the brownie, to at least a week.

This lemon muddy buddies recipe will knock your socks off! It’s another no-bake dessert or snack that lemon lovers go wild for!

If your little one loves having their own lemonade stand, then they’ll love having these brownies, muddy buddies, or lemon bundt cake, to sell along with the lemonade! 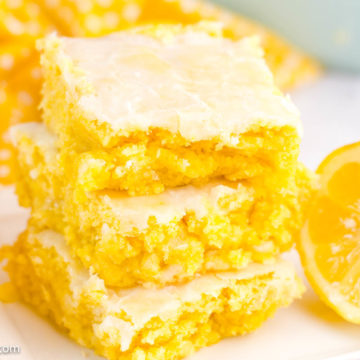 What to Serve with Lemon Brownies

The lemon brownies are very rich and can be enjoyed alone but they’re also incredible, topped with a scoop of vanilla ice cream, or even sliced sugared strawberries.