Cast Iron Brownies: A DELICIOUS brownie recipe made in a cast-iron skillet that creates a fudgy brownie that makes the perfect easy dessert!

Get ready for the richest, most fudgy brownies around. These Cast Iron Brownies are an easy dessert recipe that’s made in one bowl and done in less than an hour!

Hey friends! Meg here from Meg’s Everyday Indulgence. I felt like you needed some chocolate in your life so I brought along this delicious Cast Iron Skillet Brownie recipe.

Do you love the edges of brownies but also like a rich, fudgy center?! These brownies are the best of all things in a bite. Each brownie slice has that crisp edge on the sides and bottom while the middle has all the fudginess.

Can you bake in a cast iron?

Yes! Actually, cast irons are so great for on the stove-top AND baking. Especially when you need to cook (sear) something and then bake it too!

Can you eat brownies right out of the oven?

YES! Warm, hot brownies are my favorite! Just be careful if they’re RIGHT out of the oven because you don’t want to burn your tongue!

What makes brownies fudgy vs cakey?

If you want a fudgy brownie, then that means it’s better to have a ratio of more “fat” (so the butter & chocolate) than “flour” in your recipe. If you want more of a “cakey” brownie, you’ll need more of a flour ratio than butter/chocolate.

How to Make Cast Iron Brownies

These brownies are made in one bowl. I’ll tell you how.

First, melt your butter in a large bowl. While it’s still hot, stir in the chocolate chips. If they don’t fully melt. Add back to the microwave for 15 seconds and stir again.

Let the chocolate mixture cool for 5 minutes before proceeding. This ensures the eggs don’t scramble when they are added.

Whisk in the granulated sugar, brown sugar, and vanilla extract. Add the eggs, one at a time.

Sprinkle in the dry ingredients then fold just until the batter comes together. Stirring too much will yield tough brownies.

Lightly oil or spray your 10-inch cast iron skillet. Pour the batter into the skillet and spread evenly. Now it’s time to bake.

How Will I Know My Brownies Are Done?

One thing you definitely don’t want is an overbaked brownie. At 25 minutes, use a toothpick to check the doneness.

You don’t want the toothpick completely clean or super wet. You’re looking for slightly gooey crumbs. That will yield a perfect brownie.

Why Use a Cast Iron Skillet?

First, they distribute and hold heat really well. That means your edges will have the best, crisp texture while the inside of the brownie remains fudgy and dense.

It’s the perfect presentation. No need to cut and place these brownies on a platter when you they are already baked in a beautiful cast iron skillet.

Cut into slices and serve out of the skillet or go in with a spoon. We don’t judge here.

These brownies are incredibly rich and chocolatey on their own but if you want to get a little crazy, there are lots of fun additions you could try.

My favorite is adding a scoop of homemade vanilla ice cream on a big ‘ole slice while it’s still warm. Add a little hot fudge and whipped cream if you’re feeling extra indulgent.

You can also mix in lots of fun ingredients before baking.

I have a TON of easy recipes here on the blog. Here are the most recent… 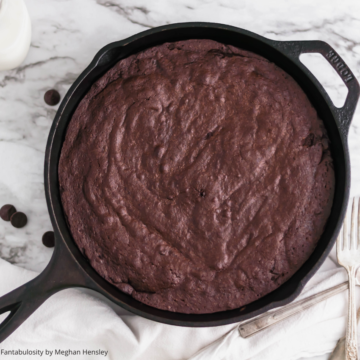 Keywords cast iron brownies
Tried this recipe?Let us know how it was!