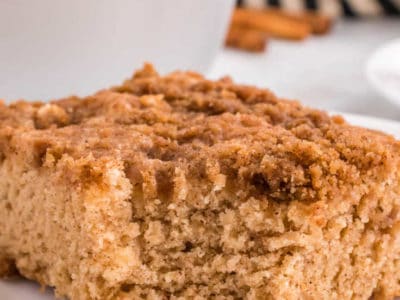 Cinnamon Coffee Cake: This tender cinnamon vanilla cake has sweet cinnamon streusel swirled in the batter and baked on top, making it the perfect treat to pair with a warm cup of coffee!

Is there anything better than a piece of homemade coffee cake? We are so excited to add this old fashioned cinnamon coffee cake recipe to our line up of cinnamon breakfast treats like our easy slow cooker apple cinnamon oatmeal, cinnamon roll casserole and cinnamon french toast sticks!

Why you’ll love this recipe

You’ll have this glorious coffee cake mixed, topped with oodles of cinnamon crumb topping, baked and ready to eat in less than 45 minutes!

With common ingredients from your pantry and refrigerator, this homemade cinnamon coffee cake recipe is a go-to for breakfast, brunch or even a mid-day snack with coffee.

Get the full recipe card with instructions below!

For the coffee cake batter:

For the streusel topping:

This is the best cinnamon coffee cake and I can’t wait for you to make it! Here are a few tips and a

For freshness, store this sour cream coffee cake in an airtight container and eat within 2-3 days.

What is coffee cake made of? Surprisingly, there is NO coffee in coffee cake. Rather, it is a tender cake usually made with cinnamon, vanilla and basic baking ingredients. In many classic recipes for coffee cake (like this one), sour cream is added to make the cake moist. You may have also heard this type of cake called crumb cake due to the spiced crumb topping on the top of the cake.

Why is it called coffee cake? The warm comforting flavor of this easy cinnamon coffee cake makes it the most complementary pairing for iced coffee or hot coffee.

Can you freeze cinnamon coffee cake? Yes! Cut the cake into pieces and wrap each piece tightly in plastic wrap or aluminum foil and place the wrapped slices in a freezer bag. Wrapped cake can be frozen for 2-3 months. What a great way to have cinnamon coffee cake any day!

How do you thaw a frozen coffee cake? Remove cake slices and allow to thaw at room temperature for about 1 hour and 15 minutes. You can also place the frozen slices of coffee cake in the refrigerator overnight to thaw.

How do you reheat frozen coffee cake? Place the frozen slices of cake on a baking sheet in a 250° F oven until warmed through and ready to serve. This will take about 8-15 minutes.

Did you make this? I’d be so grateful if you left a review below to let me know what you thought! Then, the next time you need a quick and easy recipe, come back to Fantabulosity to browse all of my easy recipes! 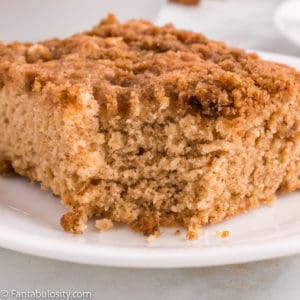 For the coffee cake batter

For the streusel topping