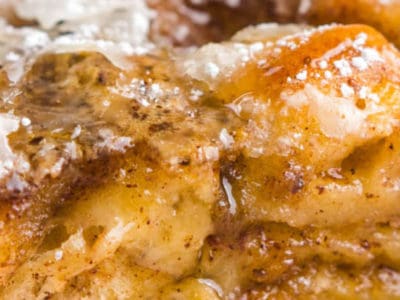 If you love cinnamon, you’ll also love to see how we make cinnamon rolls in the air fryer and this cinnamon coffee cake recipe!

Oh heavens. Your Saturday morning is going to be complete with this cinnamon roll casserole!

Why You’ll Love this Recipe

This cinnamon roll breakfast casserole is made using refrigerated cinnamon rolls! YES! We love shortcuts in the kitchen (like when we used crescent rolls for this biscuit and gravy casserole) and this recipe is no exception!

You don’t have to be limited to only making the standard cinnamon rolls with icing (although those are pretty delicious) but you can make amazingly fun things like this cinnamon roll casserole for your family to eat on those brisk mornings! (Or, throughout the entire day like we tend to do on a lazy Saturday.)

To skip right to the recipe card where you can find the ingredients and instructions for this easy recipe, just scroll down to the bottom of this post and there you’ll find where you can print and gather all of the info that you need!

However, I love showing photos of the cooking process in case you’re a visual person!

By using canned cinnamon rolls, it really cuts down on the ingredients list for cinnamon roll casserole recipe! Here’s all you need:

If you see the photos below, the first image of the cinnamon roll casserole, is baked for 20 minutes at 375°. This is a more gooey, soft, doughy center, that some prefer. For instance if you love a gooey cinnamon roll… then you may prefer 20 minutes.

The second image is the cinnamon roll casserole baked for 25-30 minutes, giving the casserole more of a “cooked” fluffy center that others may prefer.

Keep in mind, this delicious breakfast casserole is best served as a warm casserole, with a little extra syrup and powdered sugar.

If you happen to have leftovers of this cinnamon roll breakfast bake, store in an airtight container or allow casserole to come to room temperature and place plastic wrap on top of baking dish and place in the refrigerator. For best results, enjoy the next morning or within 5 days.

Can I double this recipe?

Absolutely! Just double the ingredients and use a 9×13 baking or casserole dish. Cooking time should still be the same, but keep in mind how gooey you want the center. See notes in post for different bake time.

Now although I’ve called this a cinnamon roll casserole, this could easily be called a cinnamon roll french toast casserole because of the eggs and maple syrup drizzle… so call it whatever you like, and whatever tickles your fancy!

If you love this easy breakfast casserole recipe, then you’ll adore these other breakfast recipes, such as these pancakes in the oven, this French Toast Bake and this Easy, Fluffy Pancake Recipe.

Then of course if you’d like to browse ALL of the easy breakfast recipes, you’re sure to find more to add to your weekend favorites for the perfect breakfast or for even a holiday brunch!

What do you think of this recipe? I’d be so grateful if you give it a star rating review to help others know that it’s delish!