Instant Pot Spaghetti Squash: A quick tutorial on how to cook spaghetti squash in the Instant Pot in as little as 9 minutes!

Oh how my world has been rocked.

I don’t know if I’ve been this excited since I fell in love with the garlic roasted broccoli or the first time I made sweet potatoes in the Instant Pot!

I’m not going to lie… I always bypassed the spaghetti squash in the grocery store because I felt intimidated by it, and in no way did I think I’d actually like what was inside. (Kind of like the first time I hear of cauliflower soup… I didn’t know how amazing it actually was!)

But when I got the Instant Pot, it’s like I put my brave hat on and started experimenting to see what kinds of things I could cook and how they’d turn out.

Well I am BEYOND excited to tell you that I was pleasantly surprised when this spaghetti squash came out lookin’ fine as can be after only 9 minutes.

According to Healthline, spaghetti squash is low in calories but high in fiber, vitamin C, manganese, and vitamin B6. So it’s a popular healthy side dish recipe in our house!

How to Cut a Spaghetti Squash

As you’ll see in my video and the photos, I cut the spaghetti squash vertically, from end to end.
However, I’ve since heard that you can cut horizontally for a longer “noodle”. But I liked the “noodles” the way they were and will continue to cut horizontally.
NOTE: Be VERY careful when cutting because the skin is so thick and you’ll need to use a sharp knife.

Can you freeze cooked spaghetti squash?

You can! Cook as directed, and then allow to cool. Once cooled, store in freezer container/bags and store up to 8 months.

Can you cook a whole spaghetti squash in the Instant Pot?

You can! Like the recipe below, use one cup of water, place squash on trivet and turn the vent to the “sealing” position and pressure on high for 12 minutes. When timer ends, quick-release, remove squash, slice in half and remove seeds. Using a fork, pull the insides to create spaghetti-like strands.

I even went so far to add some parmesan, garlic, and butter to it, but that recipe will come later!

How to Cook Spaghetti Squash in Instant Pot

For now, we’re only going to go over how to cook spaghetti squash in the Instant Pot, because you may choose to use it differently after it’s finished cooking!

How to Cut Spaghetti Squash

As you’ll see in the video tutorial I’ve provided here or the image below, I just use a very sharp knife, and being VERY careful, I cut the end with the stem off and then cut the squash in half, vertically.

Scoop Out the Inside of Spaghetti Squash

Next, before placing in your Instant Pot (or pressure cooker) scoop out the inside of each half of the squash, removing all of the strands and seeds. Discard.

Pour one cup of water in to your Instant Pot and place the trivet inside.

Next, place the two halves of the spaghetti squash inside of the pot, on top of the trivet.

Once the squash is inside the pot, place the lid on and turn the vent to the “sealing” position.

Turn the timer to 9 minutes and pressure on “high”.

NOTE: Finding the perfect cook time to recommend can be a struggle depending on the size of the spaghetti squash that you have. Also, be cautious of the size of squash you purchase, and the size of your Instant Pot, pot.

When the timer runs out, quick-release by turning the vent from “sealed” to “venting” using a hand-towel, potholder, or my favorite heat-resistant gloves you see below.

These have changed my world in the kitchen! I’ll wear these for recipes that require quick-release but I’ll also wear them when I’m lifting the trivet out of the pot!

Creating the “Spaghetti” out of the Squash

Still wearing your heat resistant gloves (or dish towel/potholder) hold on to one end of the spaghetti squash.

Using a fork, turn the fork upside down and begin at the vertical end of the squash and begin to scrape the cooked pulp towards you. This will create a “spaghetti” and “noodle” like texture!

TIP: If you find that your spaghetti squash is watery (this squash can be watery at times) it may not hurt to place it in a colander to let it drain before serving/mixing with the sauce.

If spaghetti squash cools while draining, briefly toss over heat while mixing with the other ingredients if desired.

How to Serve Spaghetti Squash

Our favorite way to serve spaghetti squash is simple. Butter, garlic, parmesan cheese, and a dash of red pepper flakes!

However, you can use spaghetti squash: 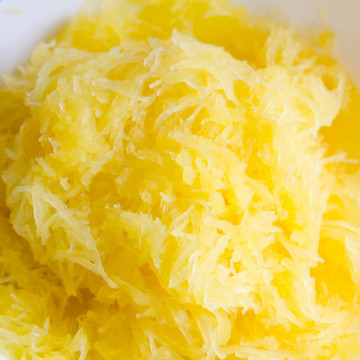 BE VERY careful cutting the spaghetti squash in half. This can be very dangerous!

Then you’ll LOVE the others I have here on Fantabulosity!