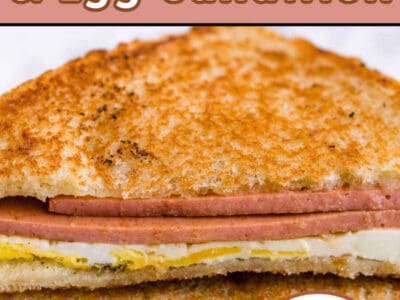 Fried Bologna and Egg Sandwich: A couple of bologna slices, an egg, a couple of slices of bread, and a pat of butter, and you’re set for a delicious breakfast recipe!

Whether you’re looking for more affordable breakfast ideas, or just quick and easy breakfast recipes, this bologna and egg sandwich is one of the best sandwiches!

The heartiness of egg and bologna sandwiches will hold you over until lunchtime, making this a perfect option for before school or work.

Rotate this sandwich with others like our Hawaiian breakfast sandwich, this bacon, egg, and cheese sandwich, and these breakfast sliders, and you’ll never tire of the same thing!

Why you’ll love this recipe:

Ingredients for these bologna sandwiches

Here’s what you need to make this easy and delicious bologna and egg sandwich. (With the addition of butter for cooking!)

Complete list of ingredients and amounts can be found in the recipe card below.

How to make a proper fried bologna sandwich

Nothing fancy here… but definitely a childhood favorite that’s simple and easy to make!

Enjoy warm! Serve immediately, or wrap in aluminum foil or a paper towel to stay warm until ready to eat, when you’re on-the-go!

This recipe makes one sandwich so the odds of you having leftovers is rare. However, if you’re wanting to make a few sandwiches in advance, so they can be easy to grab and go in the morning, you can assemble the sandwich, allow it to fully cool, and then wrap in aluminum foil or a plastic bag and store in the refrigerator until later.

To reheat: We love reheating foods like this in our air fryer! However you can also reheat the sandwich gently, by adding it to a warm skillet to let it slowly warm back up. (Or the microwave can be a quick option but be careful warming bread up in the microwave, as it can get hard it cooked too long.)

What to eat with this simple sandwich:

It’s delicious by itself but if you’re looking to round out breakfast or even lunch, this pairs so nicely with so many other things.

Is fried bologna a southern thing?

It is! Although enjoyed all over, it’s commonly a sandwich you’ll find in the south.

Bologna is similar to hot dogs or even spam. It’s a saltier lunch meat that is processed.

What condiments do you put on a bologna sandwich?

Common condiments that you may put on a bologna sandwich are ketchup, mayonnaise, and mustard.

Did you make this? I’d be so grateful if you left a review below to let me know what you thought! Then, the next time you need a quick and easy recipe, come back to Fantabulosity to browse all of my easy recipes! 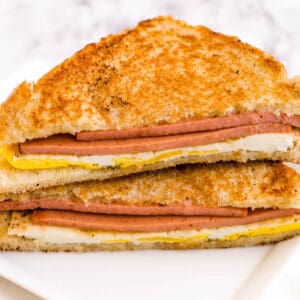 Keywords breakfast sandwich, easy sandwich recipe, fried sandwich
Tried this recipe?Let us know how it was!