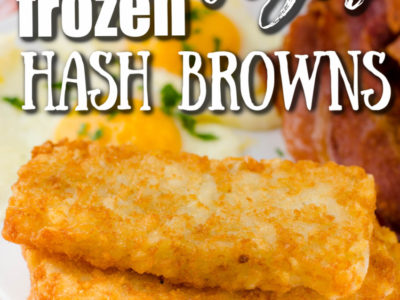 How to cook frozen hash brown patties in the air fryer in only 10 minutes, without oil for crispy hash browns for breakfast, quick snack, or dinner!

Can you cook from frozen in an air fryer?

Yes! That’s what I love about the air fryer. Being able to cook frozen foods in it like these hash brown patties, french fries, and frozen chicken wings in the air fryer makes it so much easier and faster than waiting on them to thaw them out!

Ideas for ways to use frozen hash brown patties

If you prefer to eat the hash browns by themselves, or serving breakfast for a crowd (think “hashbrown bar” or a brunch food bar) and looking for dips besides ketchup, here are some ideas for you:

How to make air fryer hashbrowns

Note: I used my Chefman air fryer to make these crispy hash browns and honestly I think it’s the best way to make air fryer frozen hash browns because the hot air circulates, giving them an even “fry” and crispy texture without oil.

(Due to the hash browns usually containing a little oil, and if your basket is “non-stick” you shouldn’t have a need to spray the basket or air fryer trays with cooking spray — and actually, some air fryer brands recommend not spraying the basket.)

However, if you find that your patties are sticking to the basket, you can use a little cooking spray or oil (like olive oil or vegetable oil) preferably in a spritzer, to spray the hash browns.

Air fry the frozen hash browns at 400° ( degrees f ), with a cook time of 10-12 minutes or until golden brown. (We preferred the 10-minute mark but cooking time can vary depending on your air fryer model and you can increase the cook time by a couple of minutes for extra crispy air fryer hash browns.)

Sprinkle with salt, if desired, and serve!

How do you store cooked hash browns?

Allow the leftover hash browns to cool off and come to room temperature. Store them in an air-tight container and place them in the refrigerator until ready to enjoy and reheat later.

How do you reheat hash browns?

Reheating hash browns using an air fryer is the best! It gives it the crispy texture like cooking them the first time! You can use a microwave to reheat although it makes them softer.

How long are hash browns good for in the fridge?

After they’ve been cooked or thawed out, they good for approximately 4-7 days.

Can you refreeze cooked hash browns?

Yes! As long as the hash browns did not sit out at room temperature for more than 2 hours.

Tips to make these the best

What to serve these with:

These hashbrown patties are delicious, served alongside hearty recipes for breakfast such as this easy biscuit and gravy casserole!

We love air fryer recipes around here but here are easy recipes you may want to try: 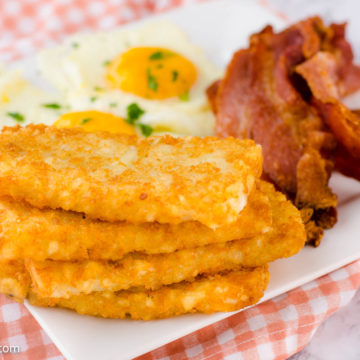