Nacho Bar Ideas: An easy “serve yourself,” style of food bar for a party or event. Topping ideas, and my favorite way to serve the cheese!

As a party planner at heart, I decided to style an easy nacho bar since food bars are my favorite!

We invited a few of our closest friends over on a Friday night, with a Facebook invite saying,

We then told them to plan on coming over to our house after school & work that Friday evening, for a nacho bar & some brew. (Juice boxes for the kiddos.)

Everyone LOVED the nacho bar idea! They were able to make their own… just the way they wanted it, and it was the perfect way to vedge out, on a Friday evening.

The idea started, when I saw a sign out front of the party rental store in my home town that said,

I just about rear-ended someone, because of my excitement. I literally planned this party days later. 😉

How to Make a Nacho Bar

I literally bought almost everything already pre-made and pre-cut. It was by choice to make the guacamole and pico de gallo. But a nacho bar is PERFECT for a last minute party idea because it was literally all ready in no time.

My guacamole recipe is a HUGE hit on Pinterest, and my top most-visited recipe post every year if you want to snag it too:

Type of Cheese for Nacho Bar

In the recipe card below, you’ll find instructions for making your own cheese for the nacho bar.

However, you can also look in to a nacho cheese machine rental, or you can usually also find the large cans of nacho cheese at grocery stores!

Chips for a Nacho Bar

Feel free to use your favorite tortilla chips (corn or flour)! Or, add a variety of chips, such as nacho cheese chips, lime chips, or even something fun like black bean chips!

It’s fun to pour chips in to a basket, to serve them that way, instead of leaving them in the bags.

But if you don’t have a basket, they’ll also go great in a large bowl!

Toppings for a Nacho Bar

(I had this wooden “plank,” left over from my son’s Nautical Birthday party,” and I thought it would work perfectly to add a little boost or height to the table.)

oh…. and guac. Guacamole. My weakness.

Mmmmm, & Chili. I do love a mean chili-cheese-nacho.

What to serve nachos in?

I found the cutest “boats,” & wooden utensils for the nachos, and they worked perfectly! No dishes to wash! (Well… besides the platters and small bowls on the table.)

The best part? People were coming and going all night, and they were able to snack as they pleased. This will definitely be happening in our house again.

If you’re able to rent a cheese machine, do it! The kids (AND ADULTS) loved the heck out of that thing. I’ll admit… I had “cheese,” with EVERYTHING the entire weekend, that I had this glorious invention, rented.

More recipes to serve, if desired:

If you’re looking to serve a few main dishes along with this, you may like the idea of these Crock Pot Enchiladas because they’re easy and can be in a slow cooker!

For my parties, I usually hire out for the cake, cake pops, or cupcakes. But this year, since a big “to-do,” wasn’t taking place, (and only our closest friends would “see,” the cake), I thought I’d give it a whirl.

Now… I can make a cake. That’s not the problem. It’s the DECORATING the cake.

There’s a cake on Pinterest, that had itty bitty balloons sticking out of it, and I thought… I can do that! I just grabbed wooden skewers, small balloons, and super glued them to the skewers, and stuck ’em in. It worked, right?!

I couldn’t send our guests out the door empty-handed. While my normal “stroll,” through the Target dollar bin, I came across playing cards & play dough, and thought they’d be the perfect little items to throw into goodie bags and to keep the kiddos busy on the car ride home.

I placed a rolling cart that I have from World Market, by the front door, and stuffed the goody bags in it… with a sign that said, “Take 1.” It worked out perfectly, and there wasn’t ONE favor left, by the end of the night.

So there it is! It was my “It’s Nacho Birthday, It’s His,” nacho bar party!

P.S. My little guy LOVED his cake… & the nachos. He’s a “cruncher,” like his momma and loves anything salty and sweet. Ok, ok… he’s like his momma because he’ll eat anything.

If you love hosting food bars like I do, then you’ll also love these 51+ Food Bar Ideas too!

Or, see some of our favorites, below:

Other Party Ideas by Fantabulosity 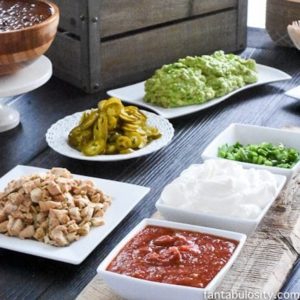 If making your own cheese